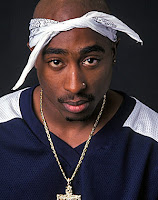 Yet another sign that the boomer generation's reign as trend leader and opinion maker has expired: Tupac Shakur sightings.
Tupac, of course, was the 25-year-old photogenic, talented rapper/poet who was gunned down in his prime in Las Vegas on September 7, 1996. He lingered for six days before indisputably dying of cardiac arrest and respiratory failure.
Used to be Elvis sightings. But rare, now, is the under-50 music aficionado who mourns the lost potential of the "King of Rock 'n Roll," who died at age 42 in (believe it or not) 1977. Thirty-two long years ago!
Hard to imagine that many boomers have even heard of Tupac...
Posted by Deborah White at Wednesday, April 29, 2009