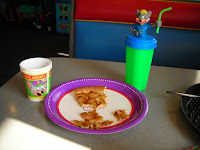 $30.
For one medium, barbecued chicken pizza with cracker-thin crust, barely-there cheese, maybe a dozen tiny kernels of chicken, and a slash of sweet barbecue sauce. And for one plastic cup topped with a grinning Chuck E. Cheese, plus a handful of tokens for kiddie rides. No drinks.
And for 90 uninterrupted minutes watching our 2 1/2 year old granddaughter experience pure joy with an abandonment only felt by young children.
Yes, $30 is a ridiculous over-charge for services provided by this popular emporium.
And yes, our time shared there with Gabriela was, indeed, priceless beyond words.
But we seriously need to buy some stock in Chuck E. Cheese...
Posted by Deborah White at Saturday, October 27, 2007 No comments:

"And we know in all things that God works for the good of those who love him, who have been called according to his purpose." --- Romans 8:28
These words by Paul have always been one of my favorite biblical passages. I once told that to a pastor who dismissively commented, "Yes, I suppose it's comforting... "
To me, these words are about faith more than comfort... having faith that things we don't understand, things we abhor, things that are tragic or painful are ultimately part of God's plan for good.
Today. Albert Gore, Jr. won the Nobel Peace Prize, perhaps the highest accord that can be awarded to any person. My heart has always broken for him after his victory in the 2000 U.S. presidential election was stolen from him... and our country.
Unlike most poiticians, Mr. Gore is a decent, honorable man. In my political reporting, I've learned of many unsung good deeds of compassion he's done for everyday Americans. He purposely performs humanitarian gestures away from the cameras and press.
God had a another purpose for Mr. Gore than the presidency. And that purpose was extraordinarily vital to our world...
Amidst his agony and jagged disappointment, Gore kept going and kept faith. And ultimately, he didn't lost his astonishing, resilient drive to use his God-given gifts.
Said the Nobel Prize committee, Al Gore "is probably the single individual who has done most to create greater worldwide understanding of the measures that need to be adopted.”
To me, Al Gore winning the Nobel Peace Prize has nothing to do with partisan vindication or political victory.
Al Gore winning the Nobel Peace Prize illustrates... and confirms again... my faith "that God works for the good of those who love him." And for the good of the world, as well.
Posted by Deborah White at Friday, October 12, 2007 No comments: